Why can a helicopter fly at all? Part 4

This is the fourth part. If you want to read in order, here are the previous parts:
Part 1: Introduction
Part 2: Bernoulli, pressures, buoyancy in detail
Part 3: Principle of reaction and conservation of momentum

Do you remember? At this moment the experiment is already taking place, in which you keep your hand flat out of the window of the moving car. It's just the rotor blades that cut flat through the air. Now the angle of the leaves has to be adjusted. To enable the blades to tilt, they are mounted so that they can be rotated about their longitudinal axis.

In order to adjust the angle of the blades, the pilot slowly pulls with the left hand on the lever, which is responsible for the so-called collective blade adjustment. "Collective" (See Fig. 10 in the previous part of this series). The blade adjustment is called "collective" because all blades are adjusted at the same time. The appearance of this lever is often compared to a handbrake by non-pilots. Unlike the car handbrake, it is to the left of the pilot's seat. By the way, the pilot's fixed seat is located on the front right of most helicopter types. 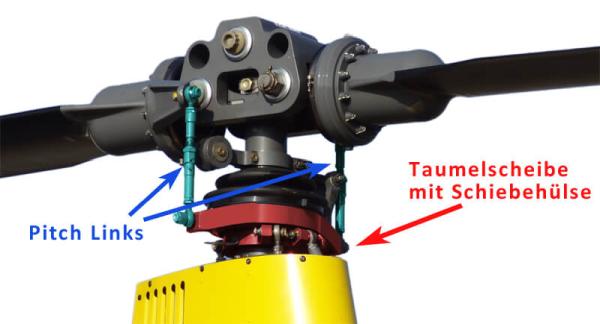 Figure 13: Elements on the rotor head

A plausible explanation for the fact that the pilot is sitting in the front right could be that in the middle between the seats there is more freedom of movement required to operate the collective pitch control. The pilot can operate this lever more easily with his left hand when he is sitting on the right side of the helicopter. If the pilot were sitting on the left, the collective pitch control would be positioned between the seat and the left door. With many types of helicopter, this is rather cramped and therefore not the ideal position. Even so, almost every helicopter can be equipped with a double rudder to enable flight with two active pilots.

The adjustment is transferred from the collective next to the pilot's seat to the rotor blades via control rods, a sliding sleeve and so-called pitch on the left (Fig. 13). Now the problem arises that the blades have to be adjusted while they are rotating. However, the control rods coming from the pilot's seat are fixed. This is solved by the swash plate (Fig. 13). The swashplate also solves another problem with acceleration and control for us, which we will talk about later. It works as follows: The lower half of the swash plate is fixed, the upper half rotates together with the main rotor. It is moved up and down as a whole. This allows the blades to be adjusted using the pitch links while the main rotor is turning. So all rotor blades are inclined at the same time by a certain angle depending on the position of the collective. As already explained, this inclination of the blades results in a lift force which increases as the inclination of the rotor blades increases, so that the helicopter finally takes off and floats. Shortly before the lift force balances the weight of the helicopter and lets the helicopter lift off the ground, something else happens: the stage is clear for the tail rotor.

In the next and last part:

You can find the last part here: Why can a helicopter fly part 5