Why can a helicopter fly at all? Part 3

This part is the third part. If you want to read in order, here are the previous parts:
Part 1: Introduction
Part 2: Bernoulli, pressures, buoyancy in detail

Part 3: Principle of reaction and conservation of momentum

The curvature of the wing is important, but not the only effect. We also know from the English naturalist Isaac Newton (1643-1727) the conservation of momentum and thus the very helpful effect of the recoil. Both are used to control the helicopter. A few experiments to illustrate this:

Experiment 3: the wall reacts! The principle of reaction

Go to a wall and push against it. What is happening? Nothing! The wall pushes back with the same force, otherwise you or the wall would fall over. The reaction force of the wall is of the same strength, but exactly the opposite: "Actio = Reactio". This is Newton's principle of reaction, somewhat more scientifically also the “3. Axiom ”called.

Experiment 4: Who pushes a colleague…. The conservation of momentum

Imagine yourself sitting on a typical swivel office chair with your feet off the floor. You want to push away your colleague who is sitting next to you in a chair like this. They both roll away in the opposite direction. You probably got half of the impulse you gave yourself, so now you both roll through the office. If your colleague is heavier than you, you will roll a little faster than him. Extreme example: In winter the battery of your car gives up and you have to push. If you find yourself on ice, push yourself away and the car just stops. Impudence.

Experiment 5: Newton greets you while driving and washing lunch box

Lower the window the next time you drive and keep your hand flat out of the window at full speed. Then tilt your hand through different angles and directions and feel the power of Newton: your hand wants to go up because you push the air down. Or the other way around. This experiment is more fun in summer than in winter.

For the winter, therefore, the following alternative experiment: The next time you wash the lunch box of your existing children, if available, after you have found a 3-day break bread in it, take the lid of the lunch box and move it sideways and back and forth through the rinse water . You will find out how the lid experiences a force up or down depending on the inclination. The flow in water is quite suitable as a model to understand the flow behavior in air. For this reason, the term “fluids” was initially used more generally.

The impulse of a body is the product of its mass and its speed. If two bodies collide with different impulses, the total impulse of all shock partners does not change during the impact. No pulse is lost, but the resulting partial pulses can change. This is described as a momentum conservation law. Everyone knows the shot put pendulum as a nice application. Or from Bud Spencer films, in which the slapped by Bud makes a role forward due to the smaller body mass. Ok, this comparison is a bit limp.

Figure 8: The conservation of momentum as almost everyone knows it

Completely crazy: What distinguishes the helicopter from the paper plane

How we can generate lift to overcome gravity is now theoretically clarified. In practice, we have to somehow ensure that the wing is blown with the highest possible air speed. We throw a paper plane into the air with our hand, a sports plane accelerates with the help of a propeller, large passenger planes use the thrust of their engines. In all the cases mentioned so far, the wings move forward together with the fuselage permanently attached to them. If the speed and the resulting pressure difference and the resulting lift force on the wings is high enough, the aircraft takes off. The process for the helicopter is somewhat different. At first, a helicopter does not move itself, instead it turns its rotor blades, which, like the wings of an airplane, are said to generate lift. Driven by a piston engine or a turbine engine, the rotor turns ever faster until it reaches a sufficiently high rotational speed. Like the wings of an airplane, the rotor blades create lift when they move through the air quickly enough and in a certain position.

While the wings are rigidly attached to aircraft and are only ever flowed against by the “airstream” from the direction of flight, the “wings” of the helicopter rotate. Due to the rotation, flow is largely independent of the actual direction of flight. That is why airplanes are also called fixed wing aircraft and helicopters are known as rotary wing aircraft. In English, the terms are "fixed wing" and "rotary wing".

Figure 9: Explanation of terms on the outside of the Robinson R44 type

Simply because of this difference in the movement or flow direction from linear / straight ahead in the aircraft to circular in the helicopter main rotor, a great deal changes aerodynamically. For example, in a circular motion, the points near the center are slower than the points further out. Due to its rotary motion, a rotor blade reaches speeds in the range of the speed of sound at its blade tip, while the speeds at the blade root near the center of rotation are too low to be able to generate usable lift. This is the principle of the devil's wheel at the fair, where people sit on a rotating disc: People who sit further away from the center of the disc move faster and are soon pushed outwards by centrifugal force. People sitting close to the center experience hardly any centrifugal forces and can stay there for a very long time. Until the evil Teufelsrad operator fires a ball attached to a rope at the person sitting in the middle and thus disturbs this balance. 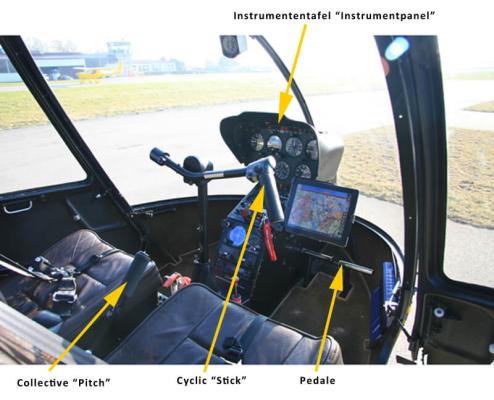 Figure 10: The workplace of the helicopter pilot in the Robinson R44

These subject areas regarding centrifugal force, blade tip speed etc. are very complex and their understanding is not necessary to answer the question why a helicopter can fly in depth at this point. To simplify matters, it is assumed below that the main rotor with its rotor blades generates the necessary lift just as easily as the wings of an airplane.

In the next part: Forward, backward, sideways. And turning.

You can find the next part here: Why can a helicopter fly part 4