During our sightseeing flights, I like to set the radio in our helicopter so that my passengers can listen to the radio via headphones - for most of them it is an exciting experience. When else do you have the opportunity to experience first-hand these frequencies that normal kitchen radio can no longer receive?

In spite of whiskey zero alcohol

On a flight, I wanted to cross a so-called control zone from west to east with my passengers. A control zone is the controlled airspace that surrounds larger airports. Clearances are required for all flight movements within this airspace, which require timely communication with the responsible tower. From the tower of the control zone that I wanted to fly through, I finally received the instruction to fly into a certain control point in the west of the control zone. After the radio message, one of the passengers asked me: “Did the pilot say something about whiskey?” - Well watch out - yes, he actually did. The wording was “enter control zone via whiskey, crossing approved as requested, report entering CTR” - in German “Fly into the control zone via whiskey, fly through approved as desired, report entry into the control zone”. That all sounds very reasonable - except, well - the whiskey! The 0,00 per mil limit applies to pilots. I can reassure you - everything is correct and of course everyone involved remains sober! 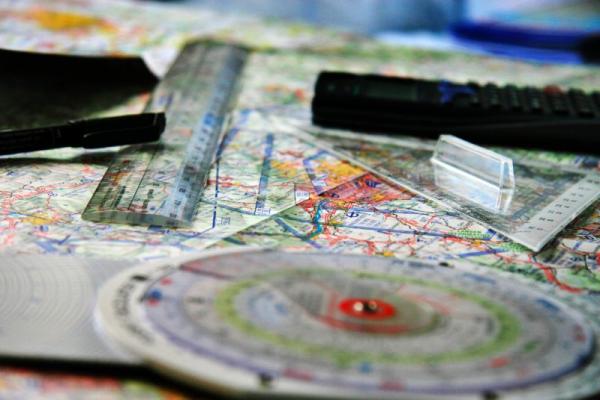 You have to know that the aeronautical radio is sometimes very indistinct or difficult to understand. The rotors and motors roar, the radio message is noisy, sometimes the passengers and the controller speak at the same time. The danger that important information would fall by the wayside would be great if there were no clear rules for radiotelephony. Before taking off from a controlled airport, for example, the pilot informs the controller that he is ready to take off with the radio message “Ready for departure” - or in German “ready for departure”. The pilot gives the go-ahead with “Cleared for takeoff”. The word “takeoff” is only mentioned in connection with a take-off release. For a long time it was regulated differently: “Ready for takeoff” and “Cleared for takeoff” could lead to serious misunderstandings, as the word “takeoff” was used in both completely different speaking groups.

When the speaking groups were not yet clearly differentiated, exactly such a misunderstanding led to the worst accident in civil aviation history at Tenerife Airport in March 1977. This flight accident with two large passenger aircraft happened because one of the pilots mistakenly understood that another aircraft was ready to take off, which at that time was still transmitted with "Ready for Takeoff", as a clearance to take off the tower, ie "Cleared for Takeoff". Both planes took off simultaneously and there was a collision. Since this tragic accident, this source of error has been eliminated by the new talk groups “Ready for departure” and “Cleared for takeoff”. The two sentences were designed as differently as possible. This clarity in radiotelephony contributes to a high degree of flight safety, so that it, together with absolutely necessary radio discipline, ensures a safe flight.

In addition to this example, this clarity is of course also extremely important for all other radio messages - this is why the so-called NATO alphabet is used when spelling aircraft or airport IDs, navigation systems or certain mandatory reporting points. Just as we spell the letter A with “Anton” and the letter B with “Berta” in everyday life, pilots have their own alphabet. For example, the letters “N” and “M” sound very similar. “November” and “Mike”, however, allow a clear distinction.

You have probably heard of the famous “Checkpoint Charlie” in Berlin. Anyone who does not know the NATO alphabet wonders why the Americans called a completely normal checkpoint Charlie of all people back then - who was this famous Charlie? If you research more closely, you will find out that there were several checkpoints that were simply lettered rather unimaginatively, a la NATO alphabet. It becomes clear: Charlie is not a famous American or Berlin personality in this case, but simply stands for the letter “C”. Checkpoint Charlie achieved more fame than its colleagues Alpha and Bravo due to its diverse uses as a novel and film location, and due to the alliteration, it is more likely to be remembered. If you want to know more about this important sight in Berlin, you will find more on this one Wikipedia page.

Nothing new in the east either

But back to our entry into the control zone. You may already have guessed it: The “W”, which in the case described above stands for a mandatory reporting point west of the airport, is referred to as “whiskey”. What is the name of a mandatory reporting point in the east of an airfield? Warning, this is a little trick question! You can find the answer below :-). To answer the riddle or if you want to practice a little pilot's ABC for your sightseeing flight, here is the table with the phonetic alphabet of NATO:

Extract from an ICAO airspace map (2011)

Solution to the small trick question: The mandatory reporting point in the east of an airfield is not designated with “Oscar” for “O” as “East”, but usually with “Echo”. The “E” stands for the English word for east, meaning “East”. Take a look at the excerpt from the airspace map.