One fine day some time ago the phone rang. It was an agency's turn. Whether the helicopter can be chartered and whether you can film it, they have a project. Now I know that agencies for any film project usually know relatively little about helicopters, what is actually feasible and possible and what is not, but they have a vivid imagination and big ideas. The performances are partly like from US action films such as: "The villain is standing on a high-rise on Marienplatz in Munich and hangs on the runners of the approaching escape helicopter that picks him up from there." Yes. There was also an inquiry once whether a man could be left hanging from a rope on the helicopter until he could no longer hold himself and then fell into the Ammersee below. From a low altitude, of course. Uh, think for a moment ... no! In retrospect that sounded a lot like Joko and Klaas' “Duel around the world” or “Circus Halligalli”. They did a bunch of crazy things there. Also with helicopters - at this point greetings to the colleagues in Berlin.

In any case, it turned out that the current request is an advertising stunt by an online shoe mail order company, which should not be mentioned here. Except that it starts with “Z”. And ends with “alando”. Well, I'll tell you - it was Zalando. The campaign was called “Now or Never”. Like in a competition, people could apply to do something extraordinary with a celebrity. However, they would only be informed immediately before the event that they have won and must come with us immediately. Now or never. In the specific case, the winner should fly with the celebrity helicopter while the helicopter controls the helicopter himself. With me as a flight instructor, of course, for support. So that the whole thing is properly documented, the cameraman should also fly. The helicopter would then be full: Me in front on the right, the celebrity in front on the left, the winner behind me and the cameraman in the back on the left.

And before you fly, something should be filmed at the airfield and spoken into the camera for explanation. After the aerodrome manager's OK had been obtained and a trade agreement was reached, the name of the celebrity came: Palina Rojinski. The name didn't mean anything to me spontaneously. Then I googled and she looked familiar to me in the photo. Just where from? Oh yes, in the movie “Männerherzen” a few years earlier she played a not very vocal but all the more wide-bodied star that wants to convince the woman-eating producer played by Till Schweiger of a record deal. He wants to enjoy the lady for a while by certifying that she has an “exceptional voice” and only at the end manages to clear the table not only with her but also with many others and tell the truth. Anyway - that was only a small part in a comedy from 2010. Here we have the real Palina in front of us, who doesn't play anyone, but is herself.

The plan was for the team with the cameraman, assistants and whoever else (probably around 10 people in total) to show up at the airfield around 10 a.m. And the location is analyzed, where what is filmed and what is spoken into the camera. I first explained to the troops how to behave at the airfield with flight operations and how not to. In the end it almost always worked out fine. The tension before and during the action was clearly evident. Palina then also arrived, picked up by car from Munich Airport, where she arrived from Berlin. And then first of all they changed clothes, made up and moderated for a while. The winner turns out to be a young woman named Sarah aged 25. She also rolled in and was shown blindfolded to the airfield. When she stood in front of Palina, the blindfold was removed in front of the cameras. She must then have reacted similarly to: “Yikes! I'm at an airfield - yikes! Palina Rojinski is standing in front of me. " As long as she recognized them immediately. The weather was similar to the current July - very warm and increasingly thunderstorm in the afternoon. Since the whole filming and moderation on the ground took a bit of time, I looked with concern at the radar image, which showed the first signs of thundercloud development at the southern peaks of Lake Ammersee and Lake Starnberg. Eventually the Munich press arrived and took photos. Palina was then instructed by me in how to steer the helicopter in a turbo-charged manner, whereby I had the impression that she was listening with a maximum of 50% attention. Understandably, she seemed more concerned that no one could take pictures under her miniskirt. "Can you shine someone in there when I'm sitting like that ??" We finally took off with the helicopter. 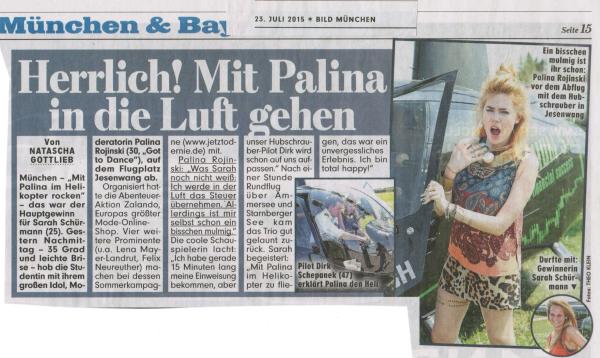 The next day a short report in a Munich newspaper. (Source: Image Munich)

The thundercloud, which is now clear, was estimated to be between the southern tip of Lake Starnberg and Weilheim and prevented a flight in this direction. So we are from Starnberg in the direction of Munich - once along the A99. The right pictures were taken, the right films captured with Palina briefly at the wheel. The helicopter wobbled a little in the wind of the distant cloud tower and the color of the girls' faces began to change. The wobbling really wasn't too bad. I was used to it anyway and the cameraman had a lot of fun, even though he had to look through the lens all the time. I really felt sorry for the girls with their now green faces. But they bravely held out the rest of the flight. I did my best to fly the two back particularly gently. Back on the ground in Jesenwang, the two were very happy. That's where the photo was taken in the newspaper above :-), if I remember correctly. After everything was finished and the color of the face had changed back to normal, there was finally something to eat. While everyone was changing, a beer garden set was set up in the hall next to the helicopter and a light snack was prepared. I threw myself back into my T-shirt - much more pleasant in the summer temperatures of 35 degrees. A pretzel then helped the girls to remove the rest of the green color from their faces and a kind of relaxed leisure mood emerged. At some point Palina looked at me a bit horrified and said “Dirk! We haven't even taken a selfie yet! " 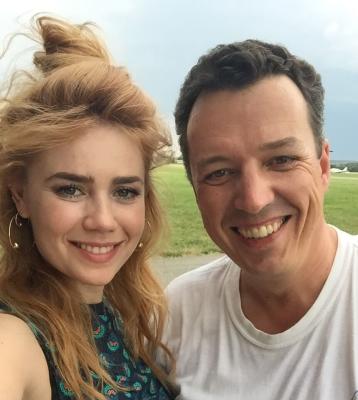 Palina after the break. Face no longer green, the cute smile is back.

From that moment at the latest, I liked her. Because she has continued to work successfully on her career since then, I often see her on television for shampoo advertising, in bizarre campaigns with Joko and Klaas or in articles about her home country Russia on the occasion of the football World Cup. In any case, I can say of myself that Palina Rojinski almost lined up in my helicopter once. Maybe there will be a reunion one day - the world is very small, especially from a helicopter perspective.

Unfortunately I have not found a Palina homepage, so just here Facebook Profile.

There is a short clip of the Zalando campaign here youtube