It's the VW among the helicopters: the Robinson R44. No, of course that has nothing to do with exhaust gas scandal or fine dust. Just as the Volkswagen was intended as a car for the people at that time, the American company Robinson Helicopter launched the still two-seater R22 in 1979, the first “cheap” helicopter for the people. Unlike most other helicopters, it was designed from the ground up as a civilian helicopter. With this, company founder Frank Robinson was successful: The Robinson R44 is currently the best-selling civilian helicopter worldwide.

What does a Robinson R44 cost?

Unlike most other helicopter types that have a military origin or at least military use, the R44 is tailored to the needs of civil aviation. The purchase price is relatively cheap at “only” half a million US $ - so just sell your Lamborghini, your Tesla and your Maserati and you can already afford the “bargain” of a used Robinson R44 helicopter. Joking aside - it quickly becomes clear: The venture is not really cheap at all - in addition to the fixed costs, there are also the very high maintenance, fuel, insurance and hangar costs! But what use are your many sports cars if you're just stuck in a traffic jam anyway? So off to the skies! But let's take a closer look at the Robinson R44 helicopter type.

How much space does a Robinson R44 offer?

The R44 has space for up to four people, one of whom is the PIC, the “Pilot in Command”. In German this is the “responsible pilot”. Every passenger has a window seat. Incidentally, this is also one of the reasons why we particularly like the R44 for our sightseeing flights at the many locations (here is an overview of our Sightseeing flight locations): Nobody has to sit in the middle of a rear row of seats and think “great, I can see a helicopter seat from behind”. Instead, anyone can press their nose against the pane or stick their head in a bubble window. In another post we explain what a Bubble window is accurate.

The Robinson R44 is available in several models: Astro, Raven I, Raven II, Cadet and Clipper are the model names with which Robinson Helicopter differentiates its R44. From the outside, they are indistinguishable for the layman - a facelift, as the automobile manufacturers like to use to advertise new models, does not make sense in aviation due to the very complex approval process and is therefore not common.

The R44 Astro is the first version of the R44 range. Their first flight took place at the end of March 1990. It is powered by a 6-cylinder boxer engine with a carburettor. The lack of hydraulic control is characteristic of this early version. This is comparable to a car without power steering. Without these hydraulics, as a pilot, you can feel the steering forces directly in your hands or arms, which many pilots - including me - really appreciate. You can really become one with the machine and feel the forces acting on the machine in your own muscles while flying. After eight hours of flight, however, you want hydraulics that save power when steering - similar to power steering in a car. The hydraulics were the most striking innovation in the successor model, the R44 Raven I. In the meantime, the R44 Raven II has also been around for a number of years, in which the carburettor engine of the previous series has been replaced by a more powerful engine with gasoline injection. In addition to the higher take-off power, which means that air conditioning can also be offered as an optional special request from this model, the comfort for the pilot is further increased because he no longer has to worry about the potential icing of the carburetor. Since the Astro and Raven I had an engine with a carburetor and therefore there was a risk of carburetor icing up under certain conditions, carburetor preheating had to be manually adapted to the flight situation on these models. 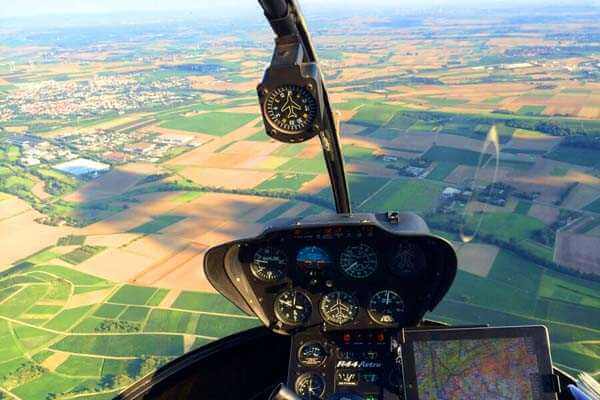 View from the cockpit of a Robinson R44 in flight

In the meantime, the R44 Cadet is also a training or cargo version of the R44, which was tailored for two people with larger luggage or for material transport and is intended to replace the very small 2-seater R22, but is therefore not relevant for our sightseeing flights .

Helicopters that are suitable for use over water and for landings in the water have the nickname “Clipper” instead of “Raven”. The most striking difference is the floats attached to the runners. There are large, constantly inflated plastic floats that have the disadvantage of significantly increased air resistance, as well as a smaller version that is normally attached to the skid when folded and can be activated by the pilot if necessary, similar to an airbag. The latter swimmers are known as “pop out floats”. An R44 Clipper without these float devices reveals to connoisseurs, including you now, your identity through additional position lights at the top of the main rotor mast fairing. 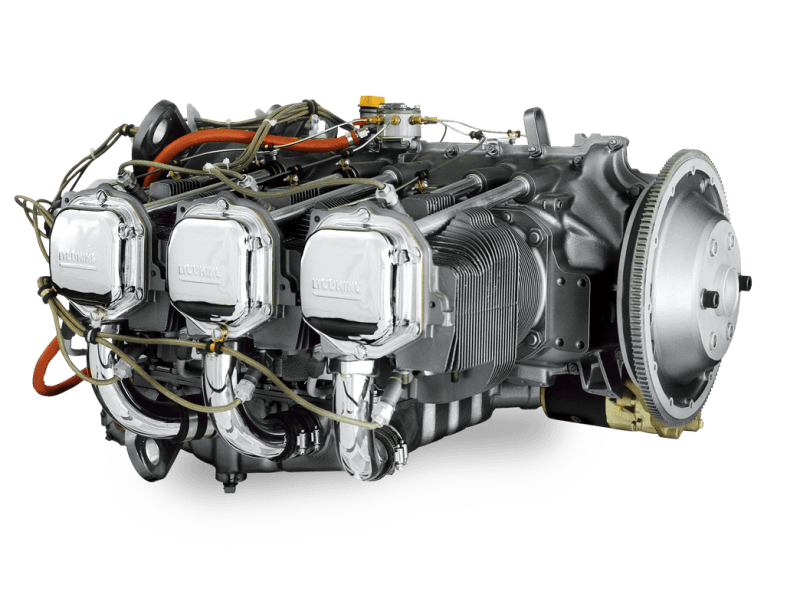 The machine is driven by an air-cooled “Lycoming O540” 6-cylinder piston engine. The O stands for “Opposed cylinder engine” - it is a boxer engine. The number 540 stands for the displacement in cubic inches. That translates to an almost proud 9 liter displacement! Since the engine runs at an almost constant speed of 2718 revolutions per minute in flight and a large amount of torque is available due to the large displacement, the R44 gets by with “only” 205 HP in normal cruise flight. For the start, up to 225PS can be used with the Astro and Raven I, and even up to 245PS with the Raven II. The engine could also provide higher performance up to more than 260PS, but is limited to the specified values ​​in order to increase the service life and thus the operational reliability. This procedure to protect the engine is called “derating”: The engine could do more - but it shouldn't so that it can work longer and, above all, more reliably.

Since it is a normal 4-stroke gasoline engine, the engine could even be operated with normal petrol. For maximum security, however, the use of the very high quality AvGas 100LL is mandatory. AvGas is the abbreviation for Aviation Gasoline. 100LL stands for 100 octane, slightly leaded (low lead). This special gasoline is very knock-resistant and therefore a very safe fuel. The engine of the R44, with a displacement of just under 9 liters, swallows about one liter of AvGas per minute during a normal flight.

The main and tail rotor

The comparatively low speed of the main rotor, together with the rotor diameter of a good ten meters, means that the rotor blades at their outer end move at a so-called blade tip speed of 773,6 kilometers per hour. As fast as an airliner! If the flight speed of the helicopter itself is added, the rotor blade, which is moving straight forward, is approached at almost the speed of sound! Under certain conditions, the flow can even lead to individual supersonic areas. One speaks of transonic flow - but more on rotor aerodynamics in a future article. 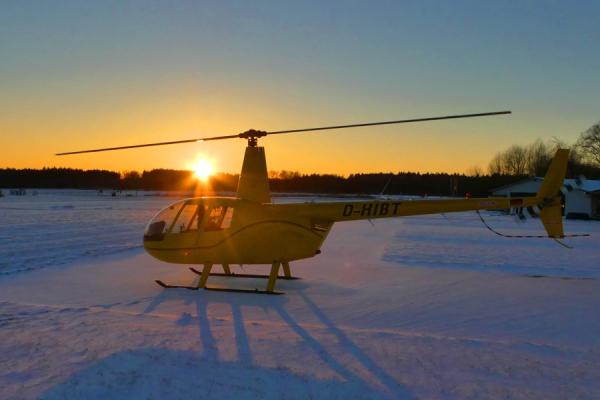 Overall, one can say about the R44: The Robinson R44 helicopter is small, but nice! At around US $ 500.000, it is relatively cheap to buy compared to other helicopters, which often cost several million euros. The same applies to flight operations. Nevertheless it is fast, agile and uses comparatively little fuel. The possibility of “parking” the helicopter in a long, high garage naturally offers very compact accommodation for helicopter conditions. Not everyone has a helipad - a helipad - with an R44 garage in the garden, but even in a normal hangar the machine takes up little space. Last but not least, it is of course important for sightseeing flights: the view to the outside. All passengers (and meaningfully also the pilot) have a window seat! The large front windows, which extend far down, and the rather compact instrument panel also allow a very clear view of the front and the bottom. An ideal sightseeing helicopter. 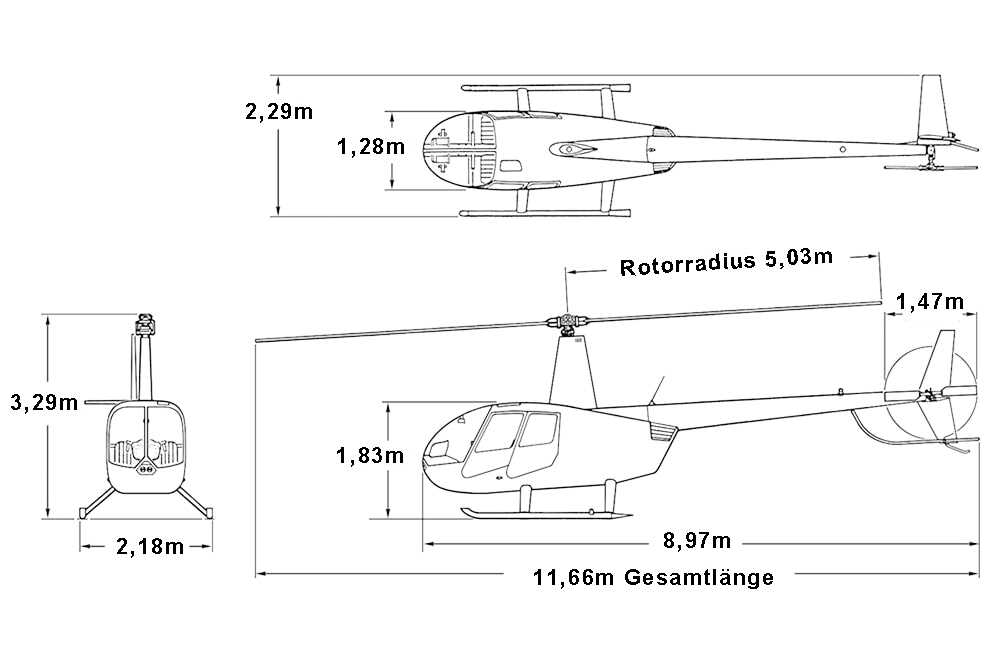