Space copter. A flight out of this world.

Reality or fiction? Prepare for a surprise!
Your children or grandchildren may be able to use the following offer from us as Mars tourists in the not too distant future: 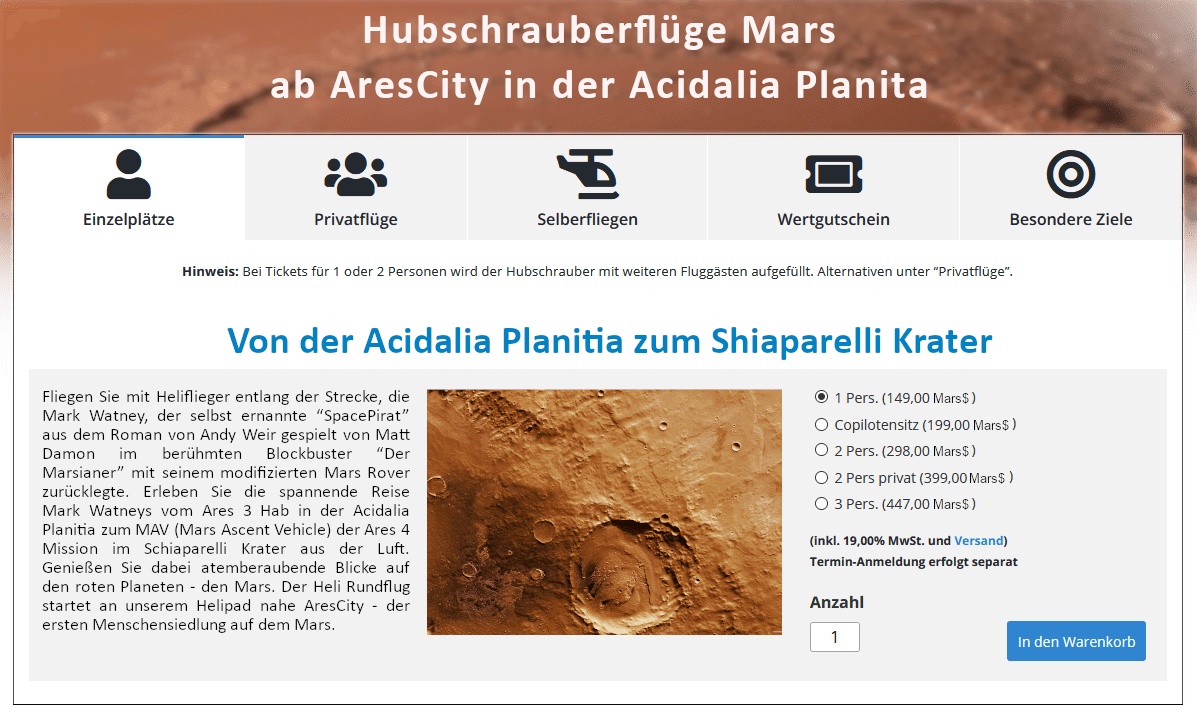 Everything just fiction and a beautiful dream? At least one thing will soon become reality: the first helicopter is scheduled to fly on Mars in 2021. Then without Mars tourists, but equipped with numerous measuring instruments and cameras.

When someone asks me: “Why does mankind have to go to Mars at all?” I like to answer: “For the same reason that Christopher Columbus had to discover and explore America”. As Heliflieger Out of a passion and engineer for aerospace, I am particularly enthusiastic about the Mars helicopter with the name “Ingenuity” - in English: “Ingenuity” -. It combines my passion for space travel with that for helicopters. And so I would like to take you into this brave new world of space copters.

Take a moment to see what special time we are living in:

For several hundred thousand years, human history has been tied to the ground and longingly looked up at the birds and stars. The first controlled gliding flight of a human being took place just 130 years ago. The German aviation pioneer Otto Lilienthal went down in history with this achievement. In the meantime, air travel has become part of everyday life for us. The famous “Space Race” began about 70 years ago. In 1961, Yuri Gagarin became the first person to orbit Earth. The race finally led to the moon with Neil Armstrong, Buzz Aldrin and the following Apollo astronauts over 50 years ago. It was not until the end of May 2020 that SpaceX was the first private space company to safely transport two astronauts to the International Space Station. For the first time, astronauts started with the help of a reusable booster, heralding a more sustainable and cost-effective era in space travel. With this, SpaceX has made history and opened the way for a new era of manned space travel, in which both spacecraft and carrier systems are reused instead of being thrown away like disposable towels. We are now among the first generations in human history to leave their home planet and explore the space around us. While we should never forget where our true home is, we have the ability to expand humanity to other celestial bodies while protecting our home planet by observing it with satellites for data on climate change, resource exploitation, rainforest destruction and much more to win. Space travel is one of the greatest opportunities but also challenges of our generation and we can be proud to be part of this evolutionary step of humanity.

What is done with the Mars helicopter on Mars?

But now to the Mars helicopter called "Ingenuity". What missions will he fly on Mars? The Mars helicopter is said to support the rover with the name “Perseverance” (in English: “endurance”). As an autonomously flying companion, the space copter Ingenuity can help the Mars rover to select interesting destinations and the best route there. Imagine that you are traveling cross-country through rough terrain and have a drone with you, with which you can find possible destinations and the best way from the air. Just as that would make your hike easier, Ingenuity makes the Mars rover's job easier and ensures mission execution is more efficient.

The Mars rover Perseverance collects, analyzes and stores, among other things, samples of Mars rock, as illustrated in this simulation by NASA:

In a future mission these samples are to be brought to earth. The aim is to analyze the habitability of Mars for humans. Can Mars houses be built with Mars stone or Mars sand? The more resources we can use for our first settlements directly from Mars, the less we have to bring with us from Earth. The Mars rover also looks for signs of former life on Mars and tries to extract oxygen from the CO2 atmosphere. The new Perseverance Rover has copied many parts of its little brother, the Rover Curiosity. Mission security can be further increased by using components that have already proven themselves on Mars.

How does the first Mars helicopter ever get to Mars? 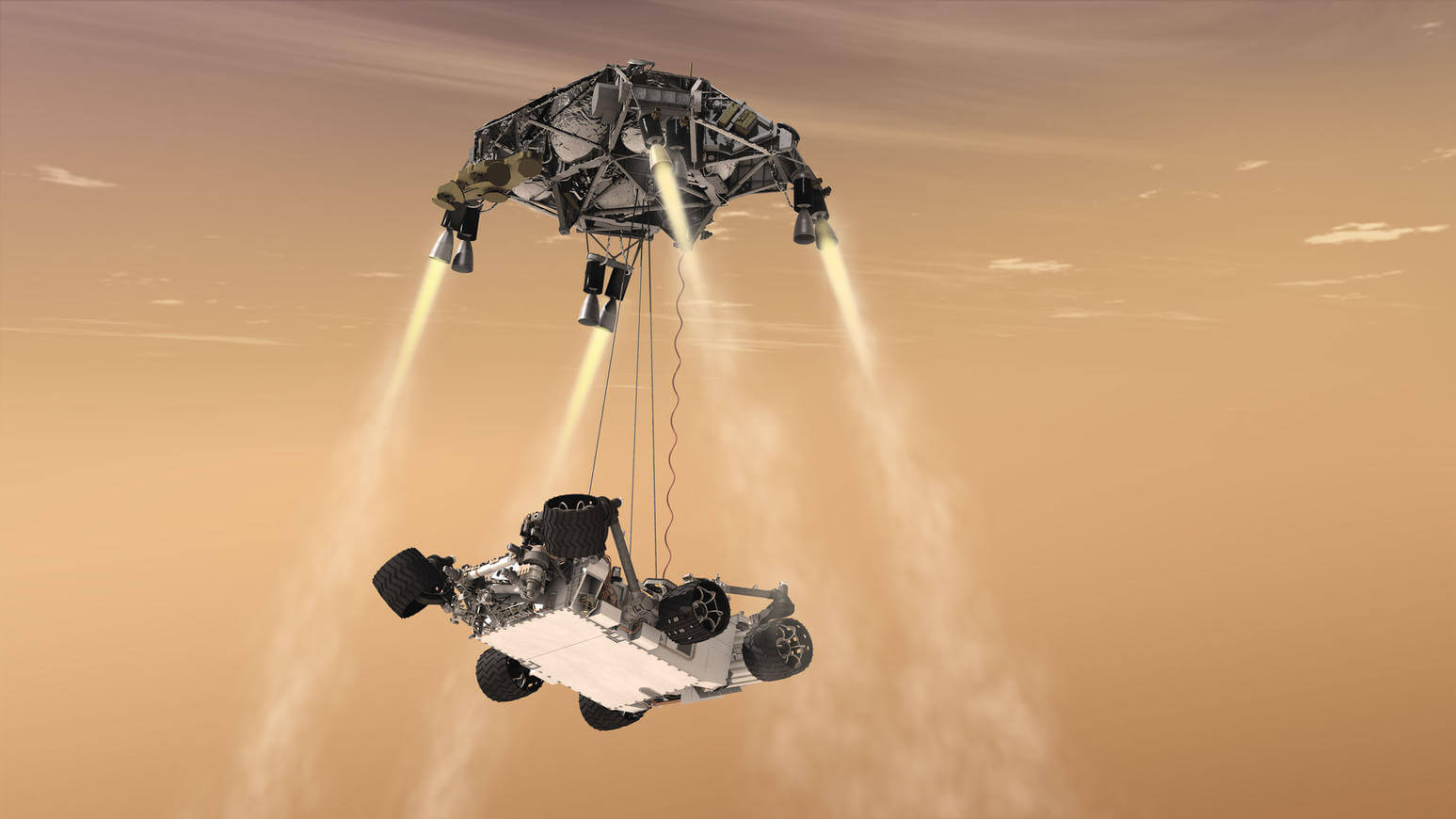 The Mars Hubi Ingenuity will fold up on the back of the Perseverance Mars Rover to reach Mars. He takes off with the mission "Mars 2020" in an Atlas V-541 rocket from the ULA. The start is in the “Launch Window” between July 30 and August 15, 2020. The constellation of Earth and Mars is then so favorable that Mars can be reached in a good six months.

The spectacular landing on Mars is scheduled for February 18, 2021 at around 21:00 p.m. Central European Time. A rocket-powered platform hovers and lowers the Rover Perseverance with the Mars Heli Ingenuity on its back to the surface of Mars in the Jezero Crater. The landing of the rover shows this animation:

Numbers, data, facts! How big is Ingenuity, the first helicopter on Mars? How far can Ingenuity fly? 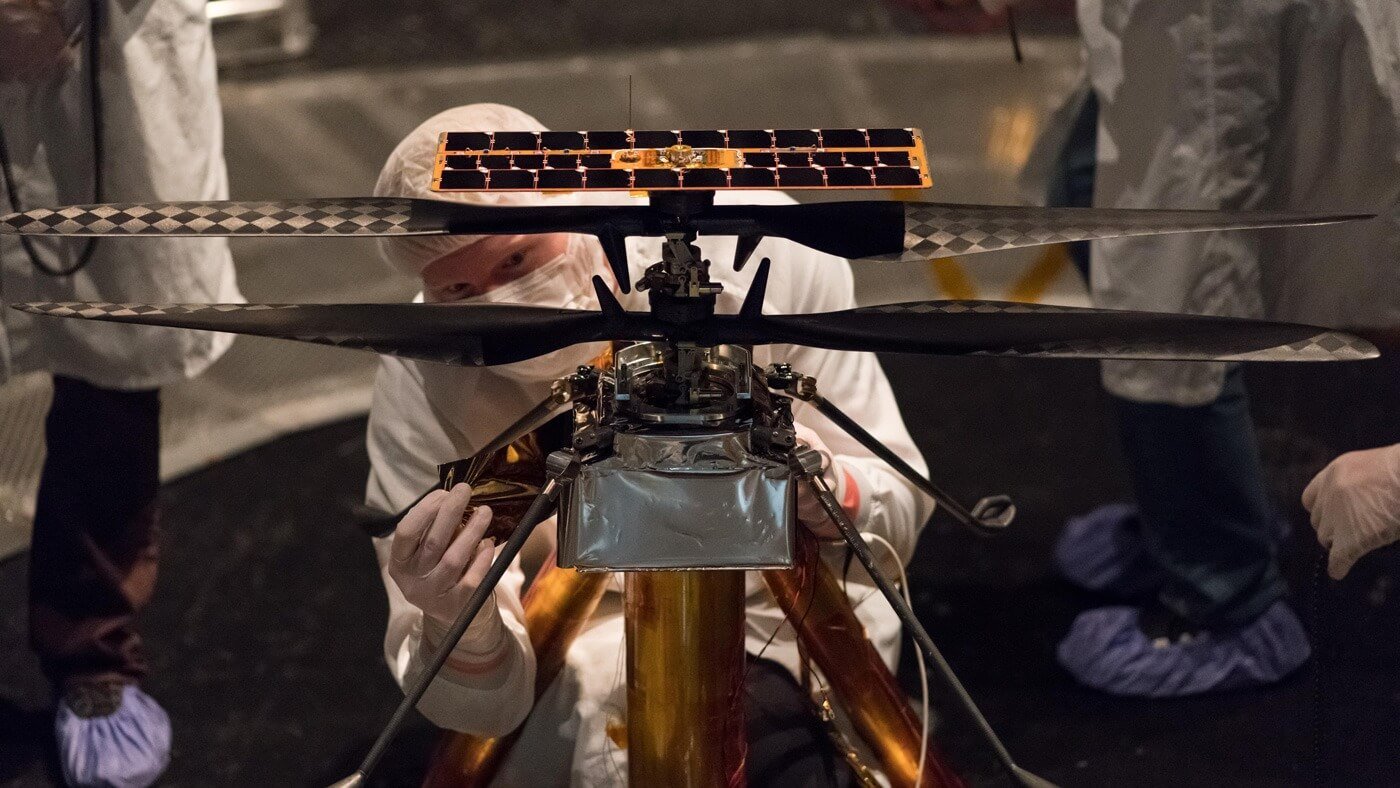 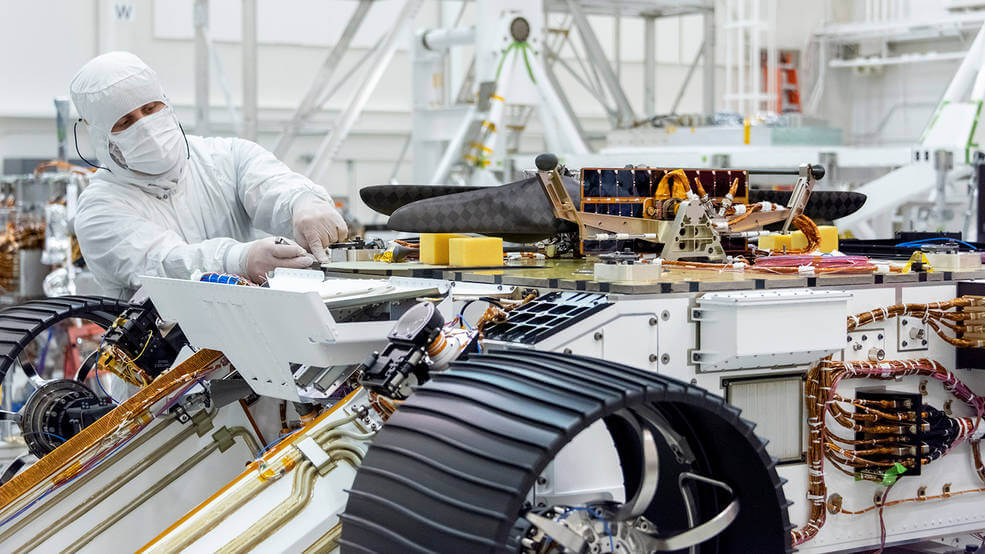 The Mars copter Ingenuity flies at a height of only 3 to 10 meters and covers a distance of up to 300 meters at this Martian knee height. Its main rotor is arranged as a “coaxial rotor”. Two rotors rotate in opposite directions so that there is no need for a tail rotor - this is also available here on earth. Read our blog article on the rotor concepts of helicopters.

The Mars Heli Ingenuity is pretty small. Its fuselage is only about 10 cm wide, but the rotor diameter is at least 1,2 m. The whole Mars helicopter weighs less than 2kg.

“Weighs” is a term that we should use very carefully here. The Mars Heli has a mass of 1,8 kg - whether on Earth or on Mars. However, its weight is much lower on Mars than on Earth. This is due to the lower gravitational pull of the red planet. It is only around 38% of the force of attraction that we are used to on our planet earth and that holds us here on the ground of facts. The same mass feels “lighter” on Mars than it does on Earth. Instead of 1,8kg, on Mars it would feel like lifting just 680g. You're probably thinking to yourself now: “It's great! A lighter helicopter can certainly fly lighter than a heavier chunk ”. That's true, but not only is gravity different on Mars, but also the atmosphere. And that has a big impact ...

Thin ice for flying in a thin atmosphere? 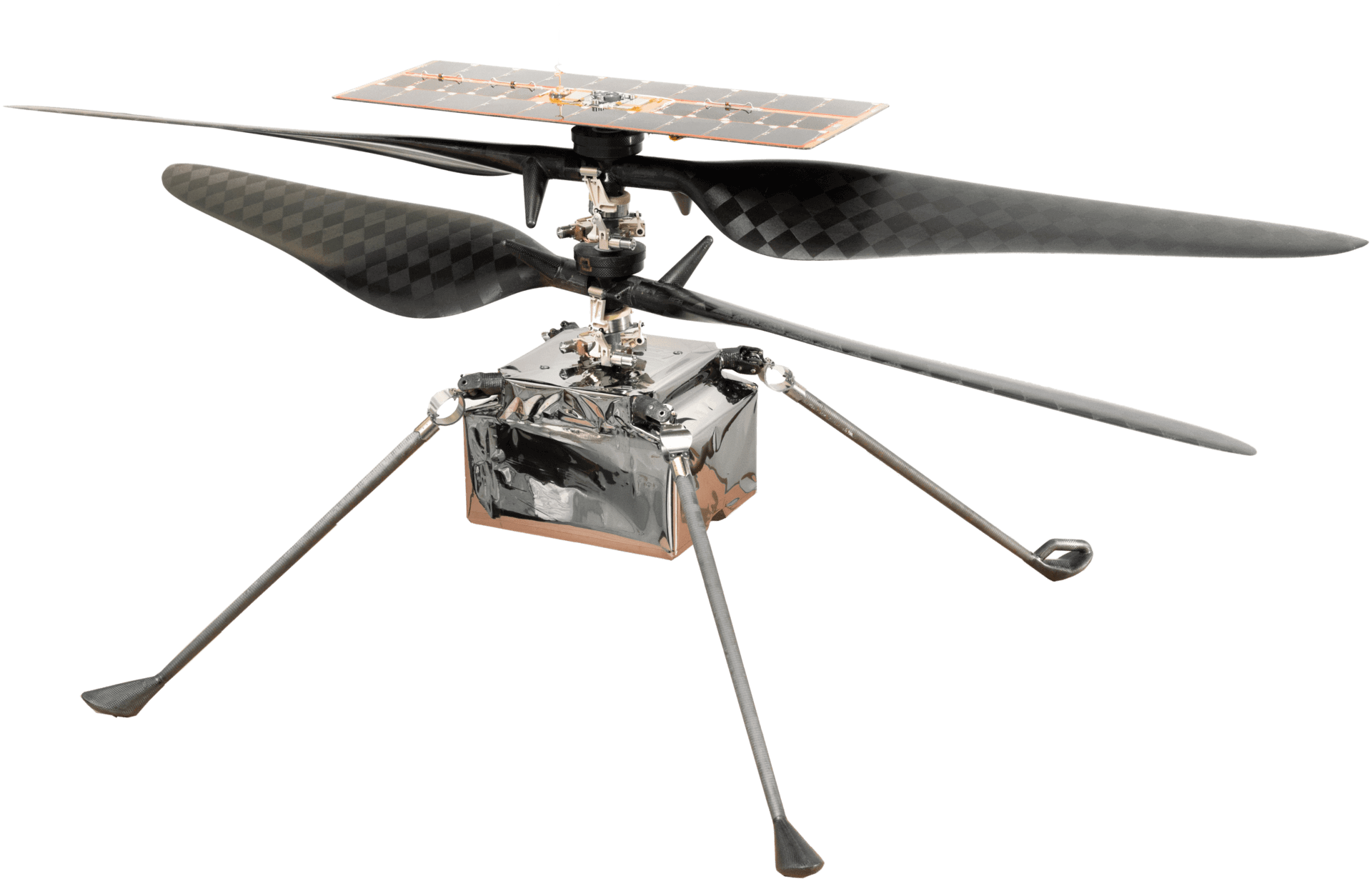 Without the gases of an atmosphere, all helicopters and airplanes would have nothing to “repel” upwards. We explained this in detail in our blog post and e-book “Why can a helicopter fly and how do you steer it”.

Here on earth we have a relatively dense atmosphere, which is mainly composed of the gases nitrogen and oxygen that we breathe. The Martian atmosphere, on the other hand, consists almost entirely of CO2, also known as carbon dioxide. Conditions hostile to life for people. Whether oxygen, nitrogen or CO2 would still be relatively irrelevant to our Mars helicopter. But one thing bothers him: his rotors have almost nothing to “grab” that they could screw up. The atmosphere on Mars is thinner than 1% of the earth's atmosphere. This is due to the lack of a magnetic field. Wait a minute - what does the magnetic field have to do with our atmosphere?

But at least there is an atmosphere at all! Without them, a Mars helicopter flight would not be possible! The thin air is hard on the Mars helicopter, but it is just enough.

How does a helicopter have to be constructed that is “lighter” on the alien planet, but has hardly any atmosphere in which to screw up? It helps a simple connection from aerodynamics, with which the lift is described:

The buoyancy is greatest when 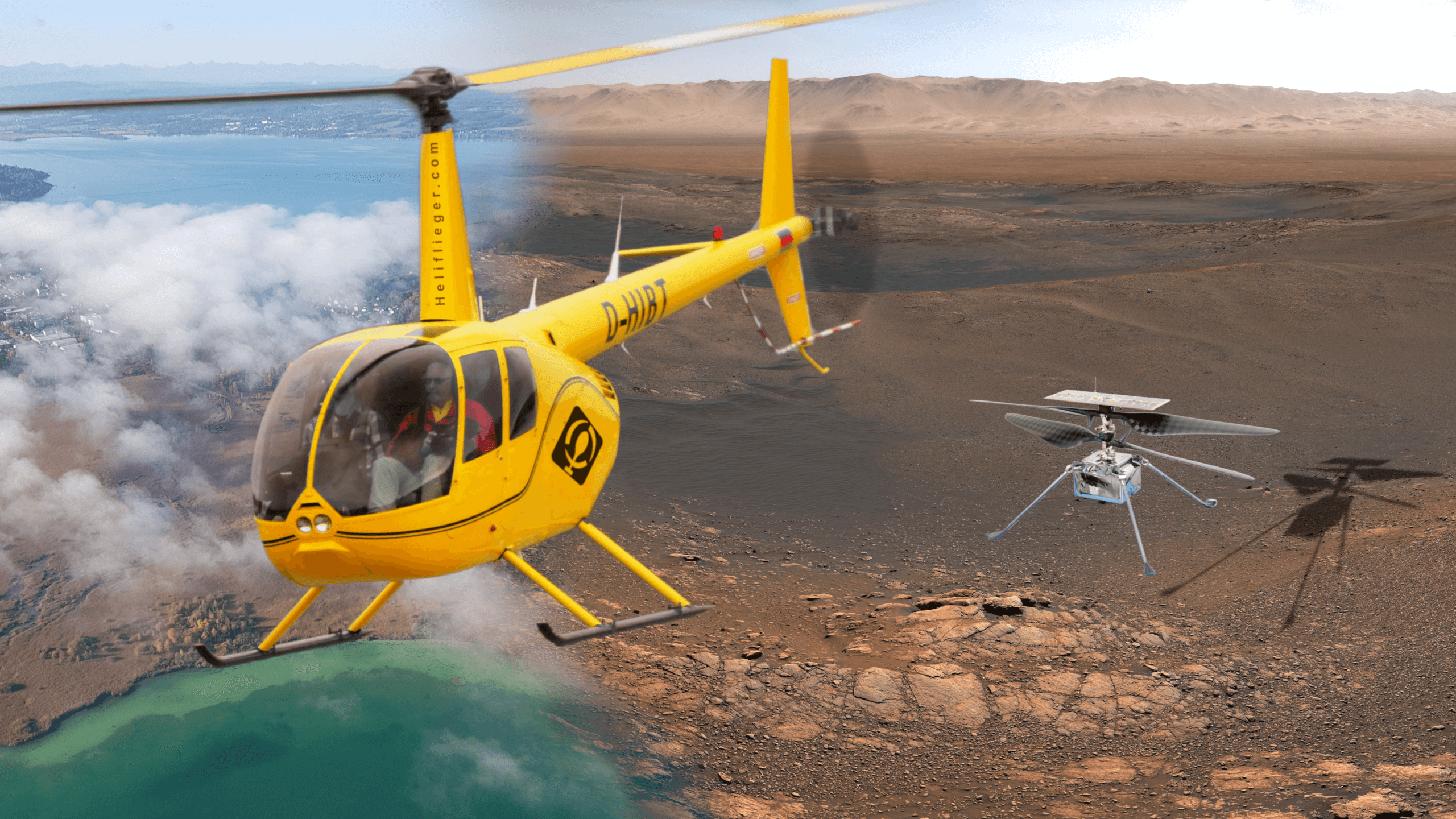 The Heliflieger.com-Heli and the Mars-Heli: The proportions of rotor blades and fuselage differ significantly due to the different atmosphere. [Source: Own illustration with images from NASA]

With the Mars helicopter over the red planet. And who controls?

A trained Mars helicopter pilot sits in a control center on Earth and controls? No! Mars is so far away that depending on the constellation of the planets Earth-Mars, radio signals take between 3 and 22 minutes from Earth to Mars. And back just as long. In the worst case, it takes almost an ¾ hour for the signal from an earth pilot to reach the Mars Hubi and a video image to come back to the pilot. So you can not control a helicopter. Imagine driving an ¾ hour with your eyes closed and then watching the video of where you went. Certainly not a good idea.

The Mars helicopter is therefore on its own. He flies autonomously! From Earth you can specify where the Mars Heli should fly to, but the Mars Heli carries out the flight movements from take-off to landing on its own. For us as helicopter pilots, the thought of being replaced by a computer is almost a bit scary - but from an engineering point of view it is also fascinating.

How often is the Mars helicopter used?

The first Mars helicopter is primarily used to test whether an autonomous flight in the Martian atmosphere is possible at all. Initially, five flights are planned within the first 30 mission days. In the past, however, many Mars missions have been able to significantly exceed the originally planned mission period. So we can hope for more flights.

Would you like to know more about the Mars helicopter? This video of a YouTube gives good insights.

Would a helicopter be conceivable that can transport people on Mars?

We will write our own blog entry for this. I can promise you now: Without a few formulas, nothing works. But get involved! Math and physics are fascinating when properly explained - forget what some people say. They are the most important disciplines in order to understand not only our world, but also foreign worlds, the whole universe. I will try to explain everything from the speed of sound to the isentropic exponent to buoyancy in an understandable way for laypeople. I am looking forward to the results myself and hope that my enthusiasm has carried over to you.

Until we set off for the first Mars-Heli sightseeing flight, I wish you visionary dreams of a new world. Let us never forget our real home. And let's keep our home, planet earth together!