Bubble windows or the house with the red roof

When it comes to sightseeing flights, our passengers understandably often want to see their own house from above. As a pilot, of course, I don't know exactly where my respective passengers live, so I have to rely on their help when looking for their property. But let's first jump to a different mission: For photo flights with professional photographers, all details are discussed in a briefing before the flight. I then fly to the object of the photographer's desire in such a way that you initially seem to fly past it a bit. When the house, the castle, the newly built bridge, or whatever should be in front of the lens, is exactly to the right of the helicopter, I start with a gentle right turn. In the best case, this curve is precisely dosed so that the object forms the center of the circle that I am flying. The photographer - who of course sits behind the pilot on the right-hand side of the helicopter with the door removed in the example - has a constant distance to the object throughout the circle and can therefore take photos with a fixed focal length from any angle along the flown curve shoot. 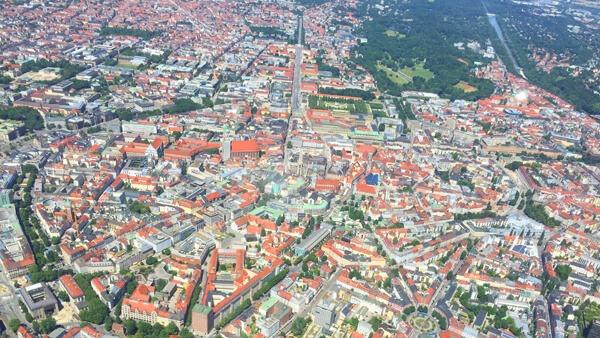 Munich from above: Many houses, many red roofs

Back to the sightseeing flights. Once my passengers have orientated themselves from the unfamiliar perspective from above - which is not so easy for the layman on the first flight - they often also find their own property, the allotment garden or the apartment, which of course they are happy to see on their sightseeing flight who wants to see the air. But in order for me to fly in the right direction, my passengers still have to tell me what their house is. Not that easy in a big city like Munich! “That house over there with the red roof” is usually the first attempt by my passengers to explain - I then point out that most of the houses here have a red roof. “Well, the house where the car is in front of it - the one with the garden!”. Hmm - I see a lot of cars and a lot of gardens and I also have to keep an eye on the airspace and the instruments. Often only one thing helps: I ask my passengers to give me directions - “a little more to the left, a little more to the right” - and there we are: Exactly above the house! We made it - but - oh crap, the helicopter has such great large windows to the side and front, but unfortunately the floor is not at all transparent. And there it is of no use to us if the house is right below us - you can see everything except your own house. The disappointment would be great if it didn't exist: the bubble window!

From the kitchen window to the car window, you are used to largely flat panes. The bubble window, on the other hand, is strongly curved outwards so that you can stick your head into the curvature and look vertically downwards. A strange feeling: you can hardly see the bulge from the inside and expect to bump your head, but it works. What a joy! The house is in sight again! So that even passengers without a bubble window can take some nice photos, I fly a curve and then get the question why you should install such strange windows in a helicopter. Is this really only for the sightseeing passengers? There are several reasons for using Bubble Windows:

Bubble Windows have the advantage that you have a view as if you were sticking your head out of the window - but without actually doing so, otherwise you would be blown away by the wind. Or at least the hairstyle would be ruined. The areas of application of such windows, where you can look down but also along the helicopter to the tail boom, are diverse: They range from external load flights (load hangs on a rope under the helicopter) to landings in impassable terrain to police and rescue operations . A new Swiss helicopter manufacturer with the name “Kopter” goes one step further and has installed a kind of glass floor between the pilot and copilot's seat in its “SH09” helicopter, with which a perfect and direct view of the external load or the nature of the landing site is possible and not indirectly via mirrors or similar aids.

With many helicopter models, the pilot can only see his own runners with the door open or with the help of a bubble window. An experienced driver has a good feeling for where the runners are - as a driver, you don't see your tires either. Drive a tractor - it's actually really strange to see your own tires while driving 🙂